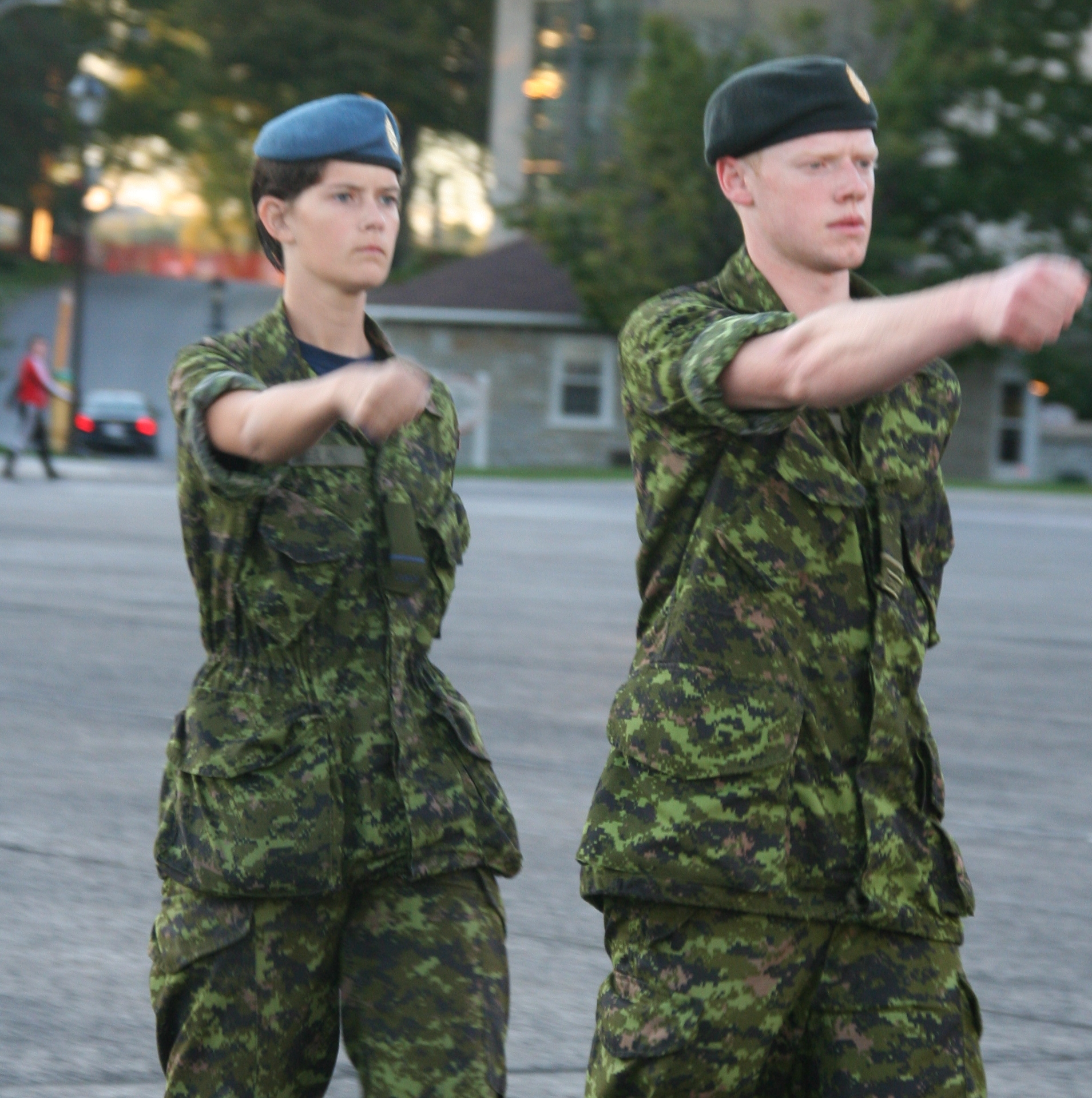 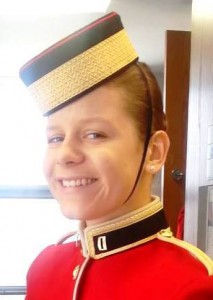 Nine Squadron is named Vercheres and its colour is orange.

Two Squadron is LaSalle squadron and its colour is Red.

Number seven of the Old Eighteen is LH Irving.

These are just a sample of the information you are expected to know inside and out as a First Year Officer Cadet. During the first month of the school year, recruits must know every detail of College Knowledge by heart or their attempt at “Passing off the Square” (a ceremonial test) will result in a big loud FAIL! 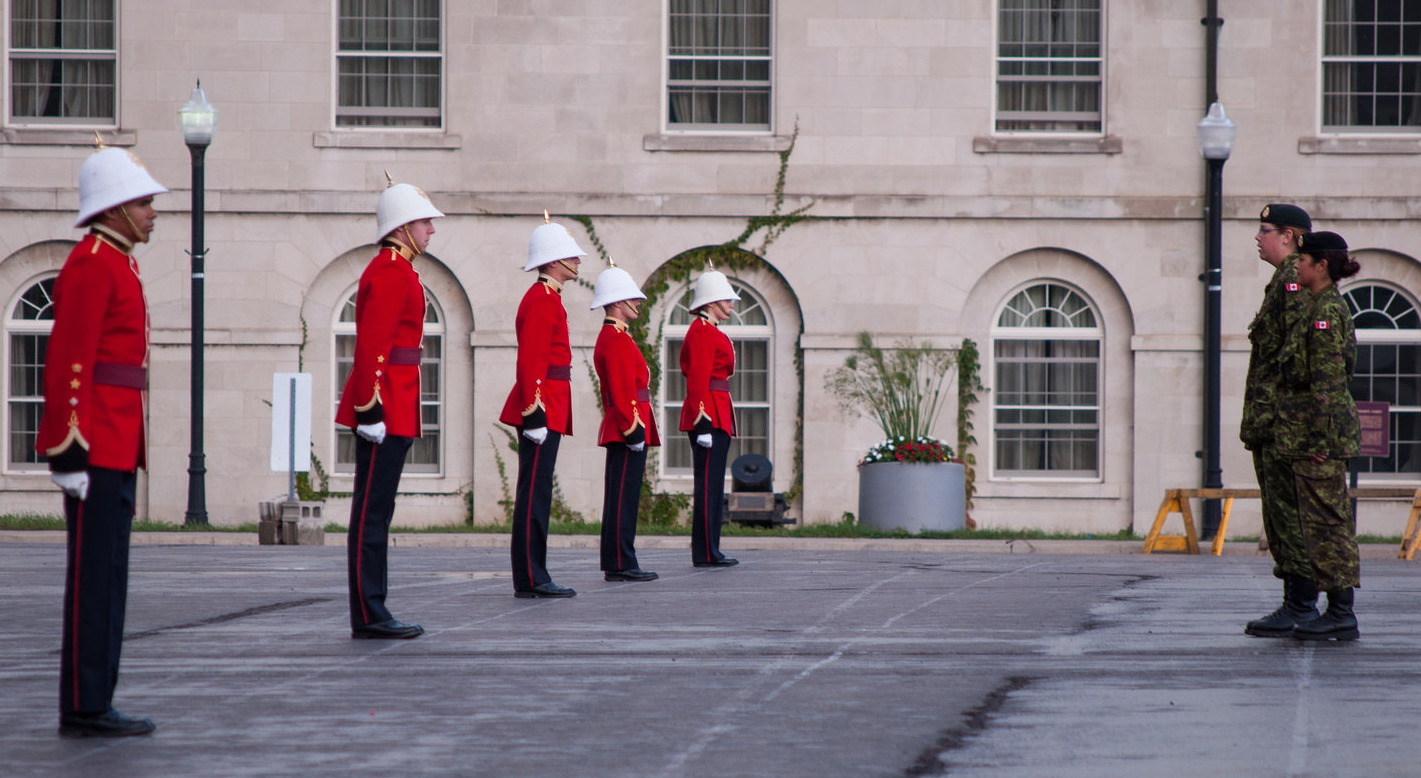 August is indeed upon us, and at this point most RMC Cadets are wrapping up their summer training or lying on the beach enjoying the sun.  Meanwhile, many of those that have been selected to start their first year of University at RMC in September have no idea what’s in store for them…

The First Year Orientation Period is the most demanding experience for many cadets’ RMC, if not military, career. It takes place during the first month of the academic year, and is staffed by Third and Fourth year Officer Cadets.

In addition to maintaining an exceptionally high standard of dress and deportment, First Year Cadets must partake in physical training and inspections, and they are not permitted to leave the peninsula or receive visitors for five weeks.

The culmination of FYOP is the obstacle course. This event consists of twelve obstacles spread throughout the College which are ultimately designed to test the teamwork and fitness of the First Years.  The completion of the obstacle course signals that FYOP is over, but not before a whole series of challenges first.

Passing Off the Square

A ceremonial test, traditionally known as “Passing Off the Square,” challenges First Year cadets each year to prove that they can belong amongst the senior cadets at RMC.

This test itself is a tightly choreographed routine involving precise drill movements that eventually lead a pair of First Years facing a member of the “Top Five” barmen. Here, they must answer one question correctly. Answering one question may sound easy, but the journey there is not.

Let’s take a step back:

First off, the recruits have to not only memorize the drill sequence that leads them to the member of the Top Five, but they must perform it flawlessly. Are their hands tilted slightly too high on the salute? Fail. Are their arms completely parallel with the ground, and in synch with one another? Did their mouth twitch as they stood at attention? Any of these tiny details can lead to a screaming FAIL! upon which the cadets are forced to make another attempt.

The real catch is if the Cadets complete the drill sequence and actually arrive to answer a question. This one question can be based off of an entire booklet of College Knowledge. Imagine trying to memorize everything in the book, and then perform under pressure under the scrutiny of senior Cadets and staff.

Can you remember exactly (without looking) the four facts that were given at the beginning of this article? If yes, good for you! Now memorize the rest of the College Knowledge booklet.

Just kidding. You don’t need to, unless of course you are an eager First Year recruit, maybe looking to get ahead by reading this article.

Who can stop old RMC!

The historic RMC cheer – the one question which I personally was asked to sing out at the top of my lungs, and luckily passed!

Seems like a lot to remember? Indeed it is a challenge, however it is only a portion of the challenges that are included in FYOP, so First Year Recruits, prepare to be worked hard!

Ex-Cadets in the News