Financial support provided by the Foundation

On January 20th 2017, I had the pleasure of attending and viewing the Inauguration of the 45th President of the United States of America, Donald J. Trump. This unique opportunity arose out of the far greater experience that is my internship at the Embassy of Canada in Washington DC during my final semester at RMCC.

Here in DC, the Embassy of Canada is the only foreign Embassy on the inaugural parade route, it is also the closest embassy to the Capitol building, and is the largest Canadian diplomatic mission abroad. So naturally it would follow that we would host a big, Canadian tail-gate party for prominent Canadians and those who do business with us. We hosted approximately 2000 guests who were treated to staples of Canadian food such as poutine and beaver tails as well as Canadian refreshments including Molson Canadian, Crown Royal and hot cider. Each staff member had an assigned role in support of the event and worked on a rotating shift basis in order to ensure the event was a huge success. As an intern and Naval Cadet from RMCC, I had the strenuous task of greeting VIPs and keeping them company on the roof of the Embassy for their luncheon and viewing party outside the Ambassador’s office. 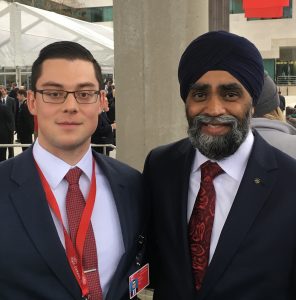 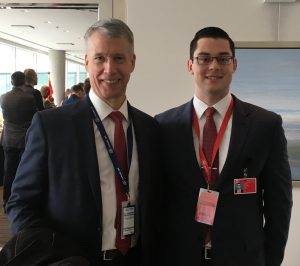 Throughout the day I had the opportunity to meet a number of prominent Canadians including the Minister of National Defence Harjit Sajjan (photo left), Minister of Foreign Affairs Chrystia Freeland, and Retired Lieutenant-General and Member of Parliament Andrew Leslie (photo right). I was also introduced to many naval officers from close allies such as Norway, Germany, United Kingdom, and the United States. Proudly wearing my RMCC class ring throughout the day helped attract a few ex-cadets who are now working as diplomats; I was surprised to meet so many people from the college here.

After the swearing in ceremony and traditional senate lunch for the incoming president, there was a parade from the Capitol to the White House which passed right in front of the Embassy! As the president’s limousine passed by we gathered on the steps with the ambassador and ministers to give a warm welcome from Canada by waving with our Canadian flag mittens. Overall, it was an incredible experience and a once in a lifetime opportunity to witness history.

A select number of cadets were able to take part in an internship this year and I was fortunate enough to be one of them. Thanks to the efforts of Dr. Christian Leuprecht for organizing and coordinating the internship process, cadets are able to learn unique skills outside the classroom and in partnership with other organizations; developing valuable competencies for a future career as an officer and in some cases offering a sneak peek at the daily roles and responsibilities of senior officers. I would also like to thank the RMC Foundation for providing a grant to support me and part of my living expenses here in DC where the cost of living is a bit higher than at the college. I am excited to be here in DC and hope that some of my fellow cadets will pursue this experience following me in the future!