BOTC had honed our leadership and fitness skills the summer before in 1976 and so after the 1977 Grad Parade was done, we all headed out to our various environmental training programs across the country that summer.  The Navy boys went out to Victoria – MARS bars, MARE, stokers and combat systems, and Naval Logistics — from all three colleges.  We gathered at Royal Roads (!) for our classroom sessions before heading out to sea in the training destroyers. VENTURE was being refurbished.

In this photo, we see the illustrious “Yukon Division” which gathered the RMC and RRMC gentlemen cadets together.  Yes…a motley crew. 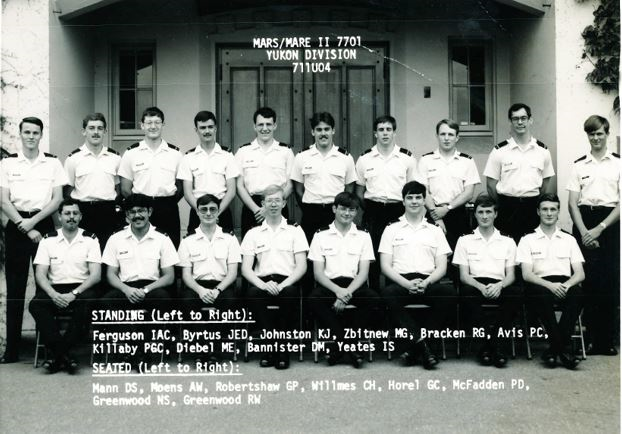 For the Kingston lads, the castle, the ocean, the mountains, the peacocks … it was all pretty overwhelming!  Our Roads hosts taught us the ways of the West: tales of mythic Tug of War competitions; English Profs that recited Lord Jim for memory, “wanging” foodstuffs destined for Kye; McFadden’s drinking game Zoom, Schwartz, Profigliano – which we happily lost; secrets for telling the Greenwood twins apart (eyebrows!); why there were no vowels in CHWYLMS (the “y” doesn’t count); and NOT to drive with either Robertshaw or “Hormel”!!

However, the most important lesson came from a source beyond our wildest expectations.  The whole naval training contingent was brought into the Castle one day and seated to listen to a hoary vestige from modern military and political history. Admiral of the Fleet, The Right Honourable Earl Mountbatten of Burma himself had made time to inspire Canada’s young maritime officers with tales of his life and motivational stories of his times at sea.

It was a wonderful speech; but we were especially taken by his closing story. He had commanded a number of ships – and several of them had been torpedoed and sunk right beneath his feet. It was the early part of the Second World War.

As HMS Javelin disappeared under the surface of the ocean, the future Sea Lord swam to the surface amidst the flotsam and jetsam. After a short and lonely time, a second head appeared above the waves. It was the crew-cut head of a very young stoker (engineer sailor) besmirched with oil and seaweed.  The plucky seaman turned in the water and immediately recognized his illustrious Captain.  Seizing the moment, realizing that he would never in this life return to such a position of freedom of speech, the stoker chirped, “Funny idn’t, sir.  How when the ship goes down, it’s always the scum what floats to the top first!”

Roaring with laughter, we learned that all seafarers are equal ‘‘in extremis’ at sea!