THE DEVIL’S BRIGADE MOVIE: Behind the scenes with a Canadian Army Major – H.M. MacIntosh 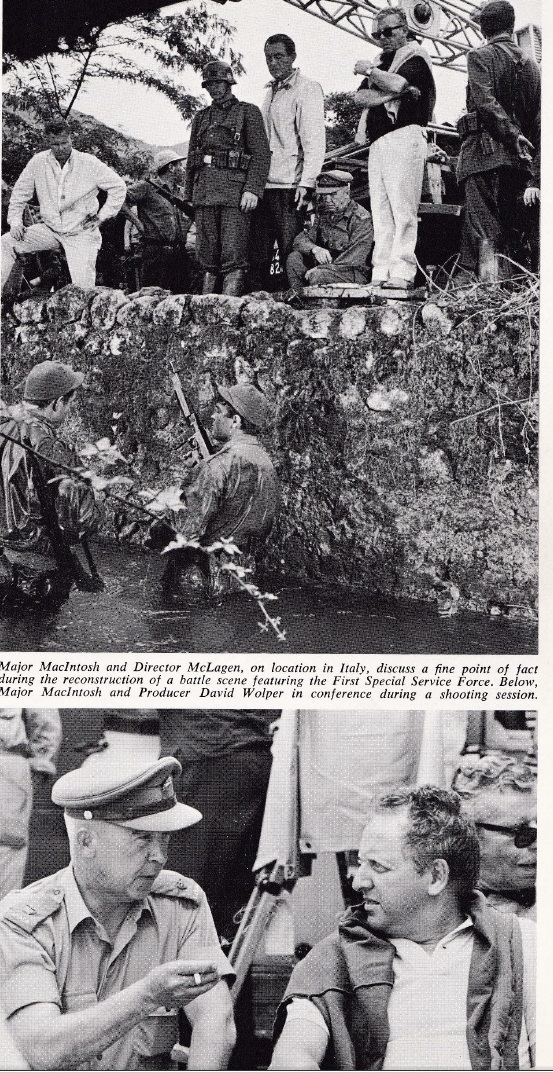 The sinewy soldiers flung themselves down the gully in a galloping run. Machine guns chattered and lethal shards of grenades laces the air. Exploding mortar bombs blasted clouds of Italian dust into the air to join the smoke of battle. Men fell in agony and relaxed into the grotesque stillness of death.

“Cut!” ordered the director, and turned to the quiet Canadian major at his side. “What do you think, Howie?”

Major H.M. MacIntosh stretched his cramped legs beside the cameraman.

The producer-director of the film, David L Wolper, smiled at his technical advisor. “That’s it”, he said.

For weeks the two men had been working side by side, 12 hours a day, six days a week to film an accurate story of the Devil’s Brigade. For Wolper, who had built an international reputation as a documentary producer, this was his first entertainment film. To a large extent he was still using the documentary techniques he employed so powerfully in his film Culloden. Major MacIntosh who had been a subaltern with the First Special Service Force during the Second World War, was on loan from the Cnadian Army to provide the technical advice that Wolper needed.

Initially, Major MacIntosh had been loaned to the film company for a period “not exceeding three weeks”. But as the last days of his duty drew near, Wolper fired an urgent letter off to CFHQ, which read in part:

“It is absolutely most urgent that we ask your permission to have Major MacIntosh remain with us during the entire production. The Canadians are a major part of this story, and the significance of making everything accurate and proper is of the utmost importance to us. Major MacIntosh fits right in, understands our needs, spots most mistakes before we start a scene and gives us information that is vitally needed. I frankly, say if he leaves us we’ll have a terrible situation on our hands, especially when we get to recreating the battle at Mount La Difensa.”

Major MacIntosh stayed on to help with the story – the story of the Devil’s Brigade.

The Devil’s Brigade was an elite Canadian-American forces of rough, touch fighting men formed in 1942 for a special job. Officially called the First Special Service Force (FSSF) the unit was conceived for suicidal, guerilla-type operations against the industrial plants of German-occupied Norway. The enthusiastic support given to the concept initially by Admiral Lord Louis Mountbatten was echoed in Canada, and it was not long before a call went out for volunteers. Canada gave of her best; and the men who stepped forward were rigorously screened at reception centres in Calgary and Ottawa for strength, intelligence and ferocity. But the recruits didn’t know much about the new force until they arrived at the Force base at Helena, Montana, where they realized that they were to be completely integrated with their American allies.

The Force was small. Organized into three regiments of two infantry battalions each and a service battalion, it was commanded by Colonel (now Major-General retired) R.T. Frederick of the U.S. Army, while the Executive was a Canadian, Lieutenant-Colonel John G. McQueen.  Two Americans and one Canadian commanded the regiments, but five of the six battalions were commanded by Canadian officers. Most of the platoon commanders were from the U.S. Army. The men were almost equal parts Canadian and American, and it didn’t take long for the two nationalities to get to know and respect the ability and courage of their allies during the rugged training they shared.

Initially, the training was geared for operations in Norway, but the Norwegian Government in exile resisted the idea of using the Force against Norwegian targets. For a short time the FSSF lacked both task and sponsor, and it appeared that the elite striking force might be disbanded for want of a job.

Whatever the role was to be, Colonel Frederick planned to be ready. He and his staff drove the force relentlessly through courses in hand-to-hand fighting, explosives and demolition, mountain climbing and winter warfare, with heavy emphasis on ski mobility. Almost as soon s they arrived in Helena, the men were hustled through parachute training including live jumps. The toughening process winnowed out the chaff until only the hard kernels were left, and built an almost fanatical in the Force.

Soon this tough brigade of killers impressed everyone with whom it came in contact, and astounded the combat evaluation team. When a normal unit was put through the series  of tests to see that it was combat ready, an overall 75 per cent was a qualification of fitness. When the Special Service Force tackled the trials it didn’t drop below 125 per cent, and even reached 200 per cent on some tests. They were ready.

In 1942 Colonel Frederick was ordered to take the Force to Alaska for operations in the Aleutians against the Japanese on Attu and Kiska. But before the Force was despatched it was given amphibious training at Norfolk, Virginia. Burning with unit pride, men decided to do better than any preceding unit. With-in a short time they were able to man an assault boat with in 32 seconds. The best the U.S. Marines had managed was 50 seconds.

They finished their training a week ahead of schedule and embarked for the Aleutians with blood in their eye. When they stormed ashore on the Island of Kiska it was too late. The Japanese defenders had slipped away in the perpetual fog, and the island was deserted.

But they didn’t stay long in the Aleutian mists; soon they were on their way to real battlefields in Italy.

The first objective given to them in Italy was a super stronghold on the mountain peak of Mount La Difensa, which was holding up the Fifth Army. Now the men realized the value of the mountain training they had been given in Montana. In the assault, the 2nd Regiment had to climb a 3,000 foot mountain. The last 1,000 feet with a 60 to 70 degree face, was scaled at night in freezing weather and in silence. Under full pack they clawed their way up the escarpment to engage the enemy at the top. They did it. Two hours after the Force engaged the enemy, the German stronghold ceased to exist; experts had predicted it would take three days to clear it.

Meanwhile other elements of the force wee packing supplies up to the sheer face of the cliff, and taking out the wounded. It took eight men about 10 hours with mountain climbing gear to bring a casualty from the top of the mountain to a point where he could be placed on an ambulance jeep. Going up, with water, food and ammunition was worse.

Under artillery, mortar and rocket fire, the Force spread out from the peak, down the saddles to other German strong points until the way was open to the Fifth Army.

From that victory on, hey never looked back. They knew that they could do what others couldn’t, and they nurtured the fierce pride in their outfit with a grinding series of assaults which honed their tactics to a precision edge.

By the time they hit the Anzio beach on the first of February, they were seasoned troops with a tradition all their own. On the beachhead a combat echelon of 1,300 FSSF troops were given 13 of the 52 Kilometer front to hold. The other 40,000 troops in the perimeter looked after the remaining thee quarters of the line.

Living under the sights of German artillery by day, the men of the Force ranged deep into enemy territory at night, killing demolishing defences with relish, and bringing back intelligence. Within a week the aggressiveness of Force patrols caused the Germans to pull back almost half a mile.

During their stay at Anzio, the Forcemen built a reputation for violent valour and quiet madness among both Allied and German troops. They adopted a deserted town in no man’s land and elected a mayor. They captured cattle and stock and planted fields of vegetables. One officer complained, “I can’t do a thing with these SOBs. They patrol all night and they farm all day.”

After dark, they melted through enemy lines and killed silently, leaving stickers on the slain with the unit badge and the message “The worst is yet to come”. The psychological effect on the Germans was worth the effort, and it was here that the Black Devil’s Brigade got its name. On the body of a German lieutenant was found a diary in which was written, “The Back Devil’s are all around us every time we come into the line, and we never hear them come.”

After the breakout, the FSSF slogged its way north in the van of the advancing armies. It was an exhausting campaign and, when the Forcemen led the allies into Rome, they were almost completely spent.

Throughout these battles, General Frederick was always up front with his men. If the fighting was tough, or the going rough, they could always expect to find the general fighting alongside or thrusting forward on a reconnaissance. He was wounded nine times. He had the complete confidence of his men and, when he left the Force in Rome for a bigger job, his men wept openly.

After resting in Italy, the Force became an important part of the seaborne assault on Southern France. They successfully captured two islands, hit the mainland and pushed eastward until they approached the Franco-Italian border. This was their last action.

At 1400 hours on 5 December 1944, the men of the Force and the flags of the United States and Canada, and the colours of the First Special Service Force dipped for the last time. The Devil’s Brigade was disbanded.

These are the bones of the story that is being put on film by David Wolper 25 years after the FSSF was formed. The accuracy of the events, the people and the battles will depend heavily on Major MacIntosh. Even with a four and a half million dollar budget, absolute accuracy is not possible. But with Wolper’s documentary training, and the memory of Major MacIntosh to guide the actors and the action, it promises to be a fitting memorial to a proud unit.

Catching up with the news for Profs and wannabe Profs…