Cpl Lystiuk completed the one course he was missing as an Officer Cadet to earn his Degree through the Division of Continuing Studies (DCS).

Article first appeared in the ‘1959 REVIEW’ 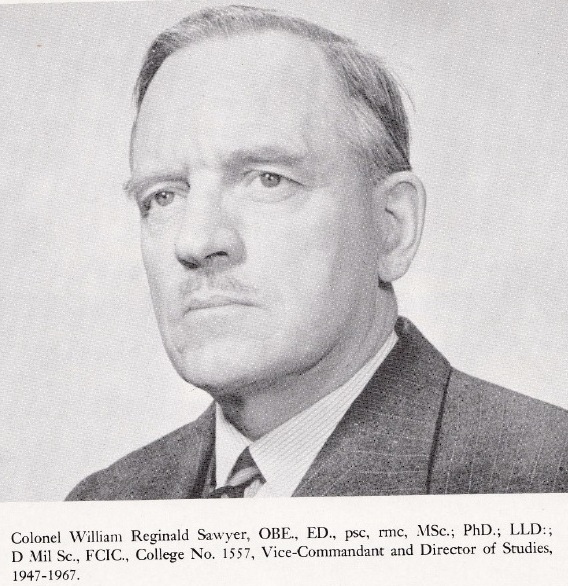 March 26, 1959, ought to be remembered as one of the very important dates in the annals of the Royal Military College. On that day, royal assent was given to a bill which the Ontario Legislature had passed several weeks before—“The Royal Military College of Canada Degrees Act, 1959.” For the first time in its history, R.M.C. was empowered to grant its own academic degrees.

We at the College desired to gain this authority because of a conviction which we have had for a long time—that since the work required of our cadets is on par with that required of students at Canadian universities, the cadets ought to receive the same recognition for their work as the university students do.

When the College was re-opened after the war, strong emphasis was put on the principle that the level of instruction should be equal to that of the universities.

The Minister of National Defence, the Honourable Brooke Claxton, stressed this in his address at the official opening ceremonies on Sept. 20, 1948: “Our purpose is to train good citizens because they make the best soldiers…. The qualities we seek here are the qualities sought in all good teaching establishments. We shall insist on thoroughness and industry to achieve high standards.

It is hardly appropriate for us to judge our own standards and to decide whether we have measure up to the Minister’s expectations.

But certainly the ten years since he spoke those words have seen growing recognition of R.M.C.’s stature as an educational institution. R.M.C. is a member of the National Conference of Canadian Universities, and in this association we meet on equal terms with the other colleges.

The number of young men who have received R.M.C. diplomas and then gone on to take degrees at Canadian universities is in the hundreds; consequently we have had many opportunities to measure our standards against those of these other institutions, and we have seldom had occasion to feel that the performance of our graduates was unsatisfactory or their preparation inadequate.

Some of our graduates have gained admission to the final year of honours courses at the universities; others have been admitted directly into graduate school upon leaving R.M.C..

Though there have been only seven graduating classes since the war, we already have a very large number of Master’s degrees and a respectable number of Doctor’s degrees—I think there were six at the last count; and these offer very good evidence that the members if our faculty have been able to stimulate the intellectual curiosity of their students.

The point need not be laboured; there is abundant proof that the work done at R.M.C. is of university standard and that the R.M.C. degree will be recognized as a respectable one.

But undoubtedly the prospect of a degree raises other questions in the minds of people interested in the College. Will the granting of a degree make any changes in the kind of education which R.M.C. offers?

Is the degree desirable from a service point of view? Is there not a danger of R.M.C. forgetting its special function as a services college?

The original pattern of R.M.C. education has already undergone a number of modifications with the passing of time.

The Act of Parliament which originally established the College described its purpose as “imparting a complete education in all branches of military tactics, fortification, engineering and general scientific knowledge in subjects connected with and necessary to a thorough knowledge of the Military profession and for qualifying officers for command and staff appointments.”

The academic course set up in 1876 was based on the course then given at the United States Military Academy, and it was in substance a civil engineering course. It remained the basic course at R.M.C. for exactly sixty years. Then in 1936 the courses were reorganized to enable graduates to enter the fourth year of civil, mechanical, electrical, and chemical engineering at the universities; at the same time, a general course was established in the fourth year for those cadets not wishing to take engineering.

When the College was re-opened in 1948 it was a unique experiment in military education: it was the first college to educate navy, army, and air force cadets together.

It also went much beyond other military colleges in the scope of what it wanted to accomplish. As the Minister of National Defence put it, R.M.C. intended to give a broad general education; its aim was to produce, not merely the trained man, but the educated man.

Our cadets would naturally require training in their service jobs, but most of this practical preparation would take place during the summer training periods, which were now very much longer than they had been in the past.

We on our part would best provide for the long-term needs of the services by trying to give the cadets an all-round or balanced education. The higher an officer goes in the services, the more competent he must be in handling ideas. We believed strongly that the officer of the future could not be a narrow specialist.

The object of education, for either a civilian or a military career, is not merely the imparting of a certain amount of knowledge; it is the training of men to think effectively, to communicate their thoughts, and to develop judgement and a sense of values.

We have steadily held to the view that these qualities can be developed best by study of the three traditional branches of learning—the humanities, the social sciences, and the physical sciences.

In fact, in the first two years the courses for arts students, science students, and students of the social sciences are very much the same.

Today’s officers must be well informed on a variety of subjects; the need imagination, flexibility, and breadth of vision. We are preparing them, not for particular niches in a stable and permanent military structure, but for rapidly changing and increasingly more complex situations. None of us can foresee the conditions which will exist by the time their careers are over. We can foresee, however, that there will be a continuing need for the clear mind, the open mind, the enquiring mind, and the creative mind.

Consequently, though the degree will involve some changes in specific courses, it will not mean any change in the basic principles upon which our course patterns are constructed. It will allow us to organize some of our courses more satisfactorily, since we will no longer have to fit them in with the differing requirements of the various universities to which our cadets have been going.

It will bring many other advantages as well. It will make it easier for us to attract both staff and students. It will save the Canadian public about three quarters of a million dollars a year now spent in sending our graduates on to universities. But, most important, it will rectify an academic injustice.

It represents belated recognition of what has been true for a long time—that there is no need for us to apologize for the quality of instruction given at the Royal Military College and that our cadets are fully as deserving of degrees as are the graduates of other Canadian colleges and universities.

Photo above & short bio appeared in the 1967 ‘REVIEW

GENERALS I HAVE TRAINED